Hi everyone, Erin here! I am thrilled to be back in the game and on the blog with finally another HSM project!

For this challenge, I wanted to capture some of the flamboyance of early silent films. I have always been inspired by photo stills of Theda Bara in Cleopatra (I will always be a little heartbroken that this film is lost), and I love over the top costume films like Don’t Change Your Husband, with Gloria Swanson dressed in the height of Orientalist fashion. (You can find this film online, it’s worth a watch for the costumes if you can stand the plot) 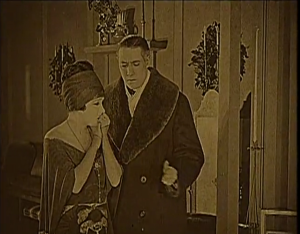 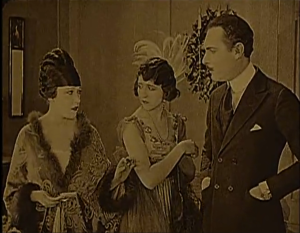 I decided that instead of copying a costume directly, I would play costume shop and make something from an illustration. Erté is one of my favorite art deco illustrators. In addition to designing costumes for theater, he moved to LA in 1925 to design in Hollywood. His illustrations are delightfully over the top, and also famously difficult to recreate

I chose an illustration from Fashion Drawings and Illustrations from “Harper’s Bazar” that I thought was dramatic enough for Gloria Swanson, and also challenged my technical ability.

According to the caption, the dress is made with “old rose silk fringe”, “grey jade beads”, and “grey velvet skirt”. I scoured the internet and trim shops in the Garment District here in NYC, and could not find fringe trim in any rose color long enough for this project. So, I settled on a 30″ midnight blue rayon fringe and pearl grey beads and silk satin for the skirt (alas, silk velvet was out of my budget, and I was worried about it holding up to all the fringe “weaving”).

After trying unsuccessfully to thread the fringe with a bead, I ended up using a sturdy, twill weave cotton base and first stitching on the beads. Then after, I took individual strands of fringe, threaded them through a large needle, and stitched these directly to the bodice to give the impression that it was made entirely of fringe.

After this, I attached the bodice lining to cover all the stitching and knots, and around the neckline and armholes added a layer of seed beads to cover even finishing. Next, I added the skirt, then two layers of fringe around the seaming to make the transition more natural.

The most difficult part was embroidering the fringe into the satin. I have never been much of an embroiderer- so please bear with the atrocity of my technique for this. I drew the pattern onto muslin and then pinned it to the place where I wanted the pattern to be. I basted directly through the lines of the pattern and then cut away the muslin. Next, I threaded the individual fringe through a large-eye needle and then from top to bottom embroidered around the stitching. The beads attached to the fringe were sewn on by hand, and unfortunately it was just impossible to make the exact pattern as the illustration. By the time I got to this part, I was wishing I had interns and slowly going crazy. So, maybe it is better I went into fashion and not costume design! I hope Erte isn’t rolling in his grave over my lack of dedication to his design. The photo below shows how I did all the embroidery- not on a hoop but on a hanger. This probably was not the best technique, as it contributed to some puckering, but I could not think of a better way to create tension as the fabrics were very different (heavy, tightly woven twill and medium weight silk satin).

Anyway, the end result makes me just like Gloria’s understudy! It’s still a work in progress, I would like to add more of the original embroidery to the skirt (as soon as I get an intern… haha). I hope one day I will have somewhere nice to wear this, and not just traipsing around my apartment! 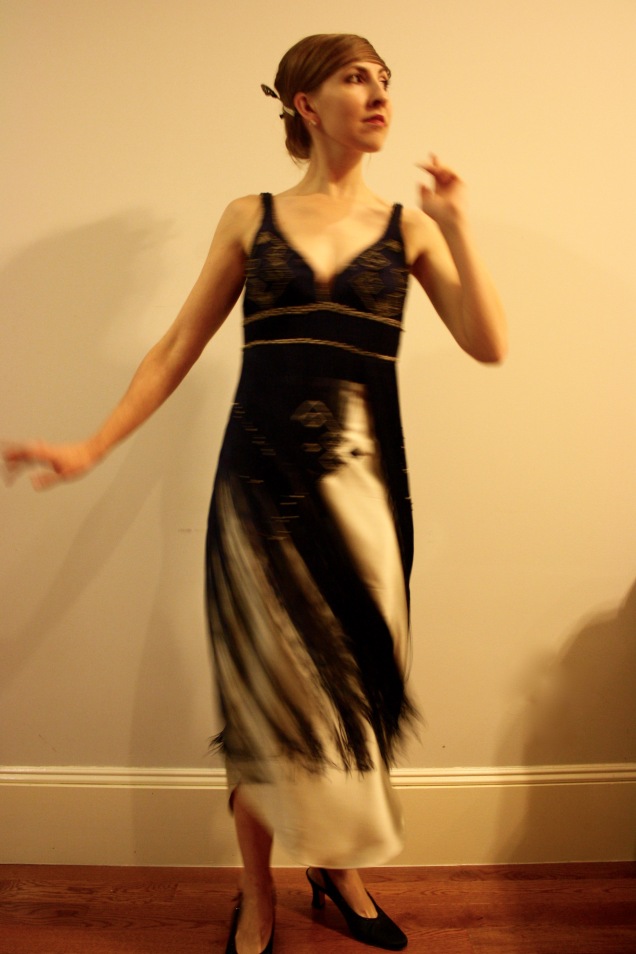 What the item is: Proposed costume for a Gloria Swanson movie, based on an Erté sketch from March, 1918
The Challenge: “Silver Screen”
What’s your onscreen inspiration?: Don’t Change Your Husband, 1919
Fabric: 100% Cotton Twill (base for bodice), 100% Cotton Muslin, black, for the bodice lining, 100% Rayon chain fringe, 100% Silk Satin (skirt)
Pattern: Self made
Year: 1918
Notions: Poly satin covered buttons, painted glass beads for embroidery, rayon chain fringe, thread.
How historically accurate is it? 80%- My embroidery technique was definitely not up to par, and some of the materials didn’t exist yet. However, I believe the shape and construction is otherwise faithful to real theater/stage costume/fancy dress of the time.
Hours to complete: 3 months (not working on it everyday, don’t worry!)
First worn: I wore an early incarnation of this dress that was missing many of the embroidery and closure details for Halloween, but the finished product has only been worn around my house, since I finished today!
Total cost: Around $75, cotton twill and lining were in the stash. $30 for the satin, $10 for beads, and I think $35 for the fringe?