Right under the wire for the deadline for January’s Firsts and Lasts challenge, but I made it! I present to you my first undergarments for a larger project I will be working on for the next few months: a 1903 ball gown based on original Mode Illustreé patterns. I’ve been obsessively collecting these for about a year now, and I’m challenging myself to actually put them to use.

To create the foundation for an Edwardian silhouette, I needed a lot of  help. I’m naturally pretty small with none of the fashionable voluptuousness of the period, so in addition to a corset I made bust and hip improvers to go under the corset and create the shape. It is necessary to do this first, because sewing patterns from this time period are based on measurements of your created measurements and not your natural measurements (which is why you’ll see so many patterns with a 36″ bust and 24″ waist, rare in real life but abundant on old patterns!)

For the corset I used a pattern from Atelier Sylphe with a waist size that is about 3″ smaller than my natural waist and bust and hip measurements that were about two inches bigger (I planned to fill this out with my “improvers”). This company does not give dates for the corsets, but I guessed which one was accurate based on a lot of illustrations and extant extant from the turn of the century. I made no alterations to the pattern and it went together beautifully. She gives a ton of photos a detailed construction information, I highly recommend using her patterns if you have the chance! My corset is a bit of an experiment in boning. The last corset I made was 1880s and I boned it with spring steel, which did not give the shape that I wanted and was historically inaccurate. This go around I tried industrial zip ties, but I read conflicting reports of how to use these. Some resources said to use two zip ties per channel, others said you only needed one, so I’m using this as a tester. I inserted a single tie into the channels on wearer’s left, and two per channel on wearer’s right. Without spending a lot of time wearing this, the channels using one tie apiece look better, but I’m curious to see how I feel about it after wearing them for an evening. I’ll keep you posted!!

The corset is made of coutil and busk from Richard the Thread with vintage lace trim and vintage nylon ribbon threading and bow. I will be adding suspenders once I receive the garter clips I ordered!

The base later is a ball chemise from Mode illustreé, with ribbon ties that can be untied and tucked in if the final gown bodice is too skimpy. I used organic cotton batiste from Organic Plus (grown and made in USA! http://organiccottonplus.com/products/batiste-white-60) for the base layer. This turned out to be a little heavier than what I wanted (a special occasion chemise probably would have been much lighter), but it would be great for daily use undergarments. For the lace insertion, I used Wearing History’s e-book  to try a historically accurate technique. The book lists a few different ideas for insertion, I used the whip stitch version. This took some practice and you can definitely tell the difference in quality between the first and last insertion that I did. For the straps I used silk ribbon ties in a royal blue – a pastel color would have been more accurate but my resource for silk ribbons was limited. The poly ribbons that were available were bulky and stiff, and did not have the drape or grace of the illustration. The entire chemise and everything else from here on out was hand sewn as my sewing machine broke while sewing the corset, and unfortunately for me the repair shop is only open during my working hours. 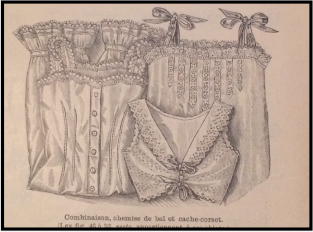 The bust improver is made from Wearing History’s pattern, I altered it only a little to make it smaller to fit me. I wanted it to match the chemise, so I used the same batiste backed with a medium weight muslin. I trimmed it in modern poly bias tape and vintage lace, stuffed with normal synthetic batting. It’s entirely hand sewn, which is probably not historically accurate but my sewing machine was broken. On a positive note, I’m getting really good at hand sewing.

The hip pad is my own pattern based on a period example. I made this really simply with two layers of muslin and one layer of batting, as I went a little overboard trimming all the other components and almost missed the deadline for this project! Couldn’t resist adding some freehand quilting to give it some shape…

Looking at the photos of this worn, I realize that I could have added a bit more coverage in the side hips- the bottom of the corset looks like it’s gaping. I might update my pad at some point with extra hip flaps to fill in the corset hips even more. 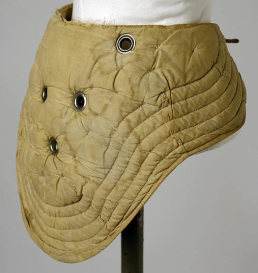 Bustle, early 20th c., Met Museum
I’m really happy with the way these all came together. Even though this will never be seen by anyone by you, dear readers, it’s a great start to creating the period shape that I wanted! The photo below is my 2017 shape vs. 1903 shape. Note that I’m wearing the “bustle” and bust improver under the corset, and then measured over the top!

The Challenge: #1 Firsts & Lasts – This is the base layer for an ongoing Mode Illustree recreation I’ll be creating this year!

How historically accurate is it? The corset may be 90%, as it’s from a pattern taken an original. The chemise almost 100%, it’s made from all period accurate materials, from a period pattern, and 100% hand sewn. The bust and hip improver are maybe 50%? I don’t really have anything accurate to compare them to besides photos, and I used synthetic batting.